There have been many cases of people making threats toward schools involving firearms.
Dec 4, 2020 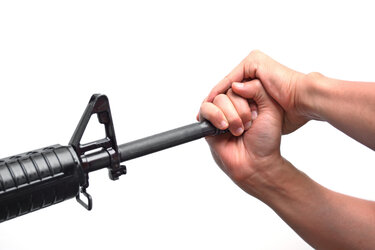 wk1003mike/Shutterstock.com
Red flag laws have been passed in 17 states and the District of Columbia. The nonpartisan Violence Prevention Research Program at the University of California at Davis studied more than 20 cases in which California’s red-flag law was used in an effort to prevent a mass shooting by taking away firearms from individuals who presented a threat to themselves and others. The law was invoked in a total of 414 cases in California from 2016 through 2018. No shootings resulted in those cases. Researchers said the study “suggests that this urgent, individualized intervention can play a role in efforts to prevent mass shootings, in health care settings and elsewhere,” according to a report from the Washington Post. They also said it isn't clear whether the attacks would have definitely taken place otherwise, but the evidence proves the red flag laws work at least somewhat. A 2018 study found gun-confiscation measures were associated with a 13.7% drop in the gun-suicide rate in Connecticut and a 7.5% reduction in Indiana. In Maryland, Montgomery County Sheriff Darren Popkin stated that during the first 3 months of the implementation of Red Flag laws, 5 instances involved schools and 4 of those included significant threats.
Written by