The Method for Measuring Sustainability Has Changed

From its inception over a century ago, sustainability strictly referred to the environmental impacts of business. That is no longer the case. Today, the definition of sustainability has been broadened to include a more holistic approach that is based on creating equitable systems that deliver positive social, environmental and economic benefits to all stakeholders .
August 13, 2021 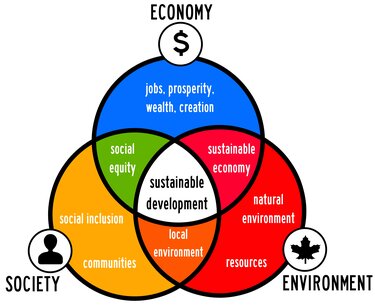 An illustration of sustainability incorporating the economy, environment, and society.Shutterstock/desdemona72
2 Reasons
For eons, the business world's sustainability efforts were measured only in terms of environmental impact. The dawn of this era roughly 130 years ago was based on concerns about the viability of the planet. In other words, the focus was on the protection and preservation of earth, its resources, species, beauty, cleanliness, and habitability.
Agree|Info|Expand
New York City under smog in 1949, when weather conditions prevented smoke from dispersing. View from the Empire State Building includes the Lincoln Building and RCA Building.Edward Ratcliffe
The Royal Society for the Protection of Birds, founded in 1889, was perhaps the first significant, environmental sustainability-focused organization in the world. Its founder, Emily Williamson, was concerned about the hunting of birds for their plumes, which were then used as fashion accessories in women's outfits. This was causing various species to approach extinction. The members of the RSPB were required to do two things: "discourage the wanton destruction of birds, and interest themselves generally in their protection" and "refrain from wearing the feathers of any bird not killed for purposes of food, the ostrich only excepted." For the next century and longer, all number of environmental sustainability efforts were made. From the establishment of Yosemite as a national park in 1890, to the creation of the National Park Service in 1916, concerns over preserving America's beautiful spaces and plentiful species were being addressed through private and public organizations. As of 2020, the NPS uses its $4 billion annual budget to look after 63 national parks and another roughly 360 national monuments, sites, preservations, recreational areas, rivers, reserves, trails, and so on. In the 1960s, with the seminal book, Silent Spring, by Rachel Carson, environmental sustainability expanded to include concerns about the poisoning of the environment through toxins and other pollutants. Carson commenced work on her book after a friend of hers, Olga Owens Huckins, wrote to her describing the death of birds around her property in Duxbury, Massachusetts, resulting from the aerial spraying of DDT to kill mosquitoes. Carson's book was aggressively opposed by chemical companies like American Cyanamid, whose biochemists argued that if Carson's ideas were followed, "insects and diseases and vermin would once again inherit the earth," and Monsanto, which issued 5,000 copies of a pamphlet that "projected a world of famine and disease caused by banning pesticides." But despite this opposition, Silent Spring began a groundswell of public concern about corporate behavior that ultimately lead to the creation of the United States Environmental Protection Agency (EPA) in 1970, and a new era of regulation and oversight of chemical and industrial companies. At that time, the EPA established itself as the leading protector of the environment—or certainly the one with the most authority over American businesses. Since its formation, it has focused primarily on air quality and radiation; water quality; land, waste and cleanup; chemicals and toxins; and enforcement of its rules regarding these areas. And it has been busy. Starting with the passing of the Clean Air Act in 1963, and then the Clean Water Act in 1972, both considered the United States' first and most influential modern environmental laws, the EPA has monitored and regulated how businesses interact with the environment. This includes preventing businesses from polluting as well as protecting local animals and land. Without regulations, companies would be more lackadaisical, turning to cheaper methods of operating that are damaging to the natural world. Clearly, the first century-plus of sustainability focused on the environment. And it's no wonder—there was a lot of concerning activity to address.
But that has changed—today, sustainability is measured in terms of the triple bottom line. This consists of people, planet and profit. It brings a multi-dimensional view to what was previously just a profit-focus.
Agree|Info|Expand
Lisa Geason-Bauer, Founder of Evolution Marketing in Nashotah, Wisconsin, discusses companies adopting Triple Bottom Lines and becoming certified "B-Corps," with Dr. Patrick Hillberg from Oakland University.
In 1981, Freer Spreckley, an international development consultant, wrote a book that would pave the way to today's sustainability movement: "Social Audit: A Management Tool for Co-operative Working." In it, Spreckley argued that businesses should "measure and report on financial performance, social wealth creation and environmental responsibility." Put another way, he was stating that companies should have two additional considerations besides profit: people and planet. Slightly over a decade later, in 1994, social entrepreneur John Elkington, echoing Spreckley's idea, coined the term "triple bottom line." His phrase encompassed the same three prongs that Spreckley identified: social equity, the environment, and economics. Elkington hoped that his new catchphrase would cause a fundamental shift in the relationship between entrepreneurs, stakeholders, and the communities in which they operate. After decades of percolating, the triple bottom line (TBL) is now, finally accepted as the framework for sustainability. Indeed, the United Nations defines sustainable development as “harmonizing three core elements: economic growth, social inclusion and environmental protection.” Notice that these are the same as people, profit, and planet, just in a slightly different order. The UN further describes sustainability as “development that meets the needs of the present without compromising the ability of future generations to meet their own needs," cementing the meaning of sustainability as a continuous, viable, renewable path for humankind. A more comprehensive approach to preserving humankind's future is finally here. The triple bottom line covers all the bases—and it's charting the course for businesses to follow.
CLOSURE
This is a significant shift. Realizing that there are two additional prongs, besides profit, that matter is a seismic shift. And it makes sense, the planet needs to be sustained, but of course, so do its human inhabitants.
Written by