Goodell has a complete organization of lieutenants and advisors that could have helped explain it to him. He must have either ignored their insight or not asked their advice.
Dec 4, 2020 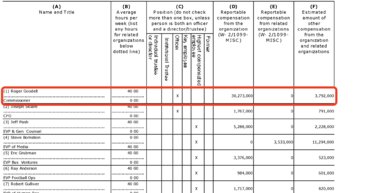 The NFL has close to 3,000 employees according to LinkedIn. As the head of an organization with such a large staff, Roger Goodell clearly has a litany of support available to him. Roger himself is a highly paid executive, earning over $34 million according to the NFL's 2014 Form 990, with other reports showing his earnings greater than $40 million each year from 2013 to 2018. With compensation this high as the head of a large organization, he obviously has a lot of assistants, advisors and officers reporting to him. His list of first officers includes a number of highly paid executives, with a CFO, EVP & General Counsel, EVP of Media, EVP of Business Ventures, EVP of Football Operations and EVP of Human Resources, each earning over $1 million per year. Additionally, the organization's Form 990 shows over $6 million paid to Paul, Weiss, Rifkind, Wharton & Garrisson LLP, one of New York's top law firms. Obviously, he has plenty of attorneys available to advise him, too. Any number of these colleagues likely could have explained the meaning behind the protests, had he so asked. That Goodell continued to misunderstand seems to represent willful ignorance on his part.
Written by

Sources state the NFL counts with up to 5,000 employees
Sources