The U.S. Has Had 100 Times as Many School Shootings as Any Other Country

There were 288 in the United States and only two in the next highest country, Canada.
December 4, 2020 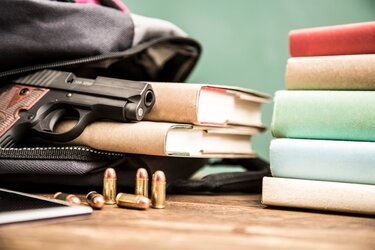 fstop123, iStock / Getty Images Plus
A school shooting is defined as "any time a gun discharges a live round inside (or into) a school building, or on (or onto) a school campus or grounds, where “school” refers to elementary, middle, and high schools—K–12—as well as colleges and universities," according to the activist and research group Everytown, which started tracking school shootings after the 2012 Sandy Hook Elementary massacre. In 2018, the U.S. averaged one school shooting per week. As of 2018, the country has had hundreds of school-based shootings, which is 57 times as many shootings as Canada, France, Germany, Japan, Italy, and the U.K. and 21 other countries - combined. Still, school shootings in elementary, middle, and high schools are not commonplace and only represent about one percent of all school gun violence incidents. But, school shootings are the cause for the majority of deaths from school gun violence. Within the first 45 days in 2018, there were 17 school shootings including the attack on Marjory Stoneman Douglas High School in Parkland, Florida when 17 people were killed and 14 people hospitalized with life-altering injuries. Some of the deadliest mass shootings in the country have taken place in schools, like the 2012 massacre at Sandy Hook Elementary Newtown, Connecticut which killed 26 people - most of whom were six year old children. According to CNBC: "The count for 2017 school shooting was 65, including seven through Feb. 14. The last year that neared 2018?s total for the first 45 days of the year was 2014, in which there were 15 school shootings midway through February. There were 58 total school shootings in 2014." No other country needs to keep statistics like this because of far stricter gun control laws.
Written by

I think CNN did thorough work on this
Sources

The US Has Had 57 Times As Many School Shootings As the Other Major Industrialized Nations Combined, CNN, May 21, 2018, Chip Grabow and Lisa Rose