The notion of getting rid of the police does not get rid of the problem of violent or mentally ill and dangerous people. Regardless of police politics, violent criminals can still harm others.
Dec 4, 2020 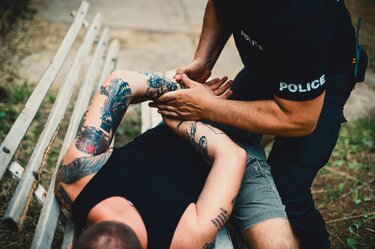 LukaTDB/Getty Images
Even in cities such as New York, where crime rates have gone down overall during the past few decades, violent crime still remains a daily reality. In fact, from January to August 2020, much of that period when the city was in lockdown due to the coronavirus pandemic, the city saw a 76% increase in shooting incidents and an 81% increase in shooting victims. Whatever the cause of those numbers, abolishing police would not abolish the thousands of violent criminals across the country. Just to take the example of some of the largest American metropolises, the Los Angeles Police Department reports upwards of 2,000 violent crimes per month; Chicago sees more than 4,000 in a given month—and New York City sees a staggering 7,000+ violent crimes per month. Murders in Chicago and Philadelphia have seen a spike in the last 12 months, with the Windy City seeing a 50% increase from 2019 to 2020. Those reports include crimes such as murder, rape, robbery, felony assault, burglary, and grand larceny. Outside of cities, too, even in rural or suburban areas, armed robbery, grand larceny, sexual assault, and other violent crimes persist. Sexual violence is a huge problem on college campuses across the country, where campus police are not enough to protect students and staff. We have to have actual local authorities to handle those matters and to keep attackers at bay.
Written by