Depending on who gains a majority in the Senate after the Georgia runoff, and the actions of both parties in the incoming Senate, Americans' political loyalties may be impacted in the short- and long-term.
Dec 6, 2020 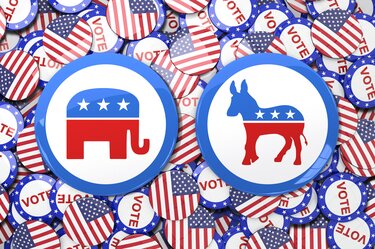 As the Affordable Care Act (ACA) proved during former President Barack Obama's presidency, voters will change their political loyalties and votes based on how legislators handle major issues. Anger over the ACA contributed to Democrats losing control of the House of Representatives and to Republicans gaining six Senate seats in the 2010 midterms. Eight years later, the ACA's popularity led voters—angered over Republicans' continued attempts to repeal the Act—to give the House back to the Dems. Although Republicans held the Senate majority in the 2018 midterms, the ACA dictated many of the Republican candidates' campaign talking points leading up to the election, forcing them to tread a line between promises of repealing the Act and promises to keep its most popular provisions. In the November 2020 general election, the presidential candidate who promised not only to keep the ACA but expand on it, Joe Biden, prevailed over President Donald Trump, who's spent his time in office continually attacking the Act. In the course of a decade, the ACA showed that Americans were not only paying attention to what was happening in D.C., but they were voting based on how their elected representatives handled legislation that personally impacts their lives. Now, at a time when public concern has reached a fever pitch regarding personally impactful issues like COVID-19 and racial justice, and people want to know what the government intends to do about these issues, more Americans than ever are paying more attention than ever. The 2020 election saw record-setting voter turnout and greatly increased political participation overall. As people literally worry over the life-and-death repercussions of COVID-19, more Americans are keeping an eye on the political landscape and who's in charge. The incoming Senate will be under some of the most intense scrutiny any Senate has faced in generations, giving both parties an unprecedented opportunity to impact political loyalties and realities for years to come. For example, if Biden's plans can get past his opposition in the Senate and effect popular, meaningful legislation, the Democratic Party could potentially sway more Americans toward becoming and staying Democratic voters. This could be especially true if the ACA remains in effect and aids in allowing more Americans affected by COVID-19 to get the help they need. Plus, the Trump-era attrition of Republican voters in certain demographics, such as moderate Republicans and suburban women, may have a long-term positive impact on the Democratic Party's voter base. If so, the consequences for the Republican Party could be long-lasting. On the other side of the aisle, the Trump-era rise in far-right wing politics may continue, especially in the form of backlash against any Democrat attempts to place restrictions on personal freedoms (such as gun ownership and COVID-19 quarantines/lock downs), or to raise taxes to fund policies generally unpopular with the conservative base—like the ACA. Far-right wing messaging may resonate with an increasing number of voters, especially if continued or more stringent COVID-related restrictions persist and more Americans suffer financially from the pandemic's effect on the economy. Who wins Georgia's two Senate seats will help determine whether Republicans maintain their Senate majority or if the balance of power evens out. And that majority and who holds the reins of power will affect both parties' abilities to get things done and, therefore, maintain or increase their voter bases—especially with so many high stakes in the game.
CLOSURE
Every American, regardless of party affiliation and previous involvement in politics, should care about what happens in Georgia’s Jan. 5, 2021 runoff, as its results will literally dictate the immediate- and long-term future of American politics in the form of who controls the U.S. Senate.
Written by

The ACA, Repeal, And The Politics Of Backlash

The most important issue of this election: Obamacare

A decade of Obamacare: How health care went from wrecking to boosting Democrats

GOP’s midterm peril: What if they win on killing Obamacare?